"March winds and April showers
bring forth May flowers"

So says the old folk rhyme, and it's a couplet that has double meaning as I write this. March did indeed deliver some fairly ferocious winds, especially at the end of the Easter weekend, which sadly did a great deal of damage in the arboretum. Now we are halfway through April and enjoying our fair share of showers but also some beautiful warm sunshine and temperatures in the high teens celsius in recent days. April this year also brings with it new opportunity as I am leaving Winkworth and moving on to pastures new. It's been a great experience getting to know the arboretum and its wildlife these past couple of years, and I hope you've enjoyed reading my ramblings about the things I've seen when I've been out and about.
So, for the final time - from me at least - here's a round-up of what's been happening at Winkworth in the past few weeks...
In the three weeks since my previous blog post winter has well and truly given way to spring and everything is bursting in to life around the arboretum. Birdsong is increasing all the time, with more and more Chiffchaffs each day since late March, while the first Blackcaps and Willow Warblers were heard on 30th March and 4th April respectively - both exactly a year to the day since their arrivals in 2015. The winter visitors have more or less all departed now, with just the odd Brambling still around in the first week of April. My first Winkworth Swallows of the year were two flying purposefully north high above the gardeners' yard on 3rd April, while early on the 10th I heard my first Cuckoo of the year, giving its distinctive two note song just up the valley from the arboretum.
Many of our resident birds are now busying themselves with nest building, like the Treecreepers which are again taking up residence in the wall of the boathouse as they did last year.
Down on Rowe's Flashe Lake we have already seen the first Mallard ducklings of the year - a clutch of a dozen appeared on 7th April.
Also of note on Rowe's Flashe recently have been occasional Pochard (there was a pair present on the 4th), up to half a dozen Little Grebes, the now fairly regular Bar-headed Goose, plus the rather odd-looking Canada/Greylag hybrid which appeared last week.


Butterflies are starting to be seen more regularly now, particularly in the warm sunshine this past week. I've noted Peacock, Brimstone and Comma at Winkworth recently, while I've seen Orange-tip, Holly Blue, Small Tortoiseshell and Speckled Wood elsewhere locally this week, so it's only a matter of time and good weather before they take to the wing in the arboretum too.
Anyway, back to the flowers I mentioned in my opening paragraph. In addition to the glorious displays of Magnolia, Camellia and Cherry, the resident wild flowers are beginning to put on a great show of their own. Here's a few that Ann Jacobs and I have photographed here recently.

And that's it from me! Thanks for reading, and do get over to Winkworth soon if you haven't visited recently or at all - it really does look particularly wonderful at this time of year.

Well, lots to talk about since my last blog post, even though it's only been a couple of weeks. It's been a mixed bag on the weather side of things, with an extended spell of north-easterly winds giving a couple of weeks of largely dry, often fine but chilly weather. Now the winds are back in the south/south-west and after the warmest day of the year so far on Good Friday we're now back to rather damp and unsettled for the Easter weekend. Still, there are signs of new life bursting forth all over the arboretum now. 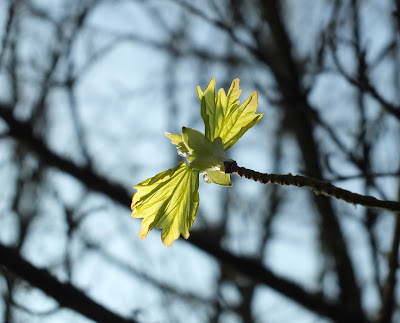 As happened this time last year the north-easterly winds have rather held back some of the spring migrant birds, but this past week or so the first Chiffchaffs have begun returning, and just this morning I noted at least five around the arboretum, some occasionally singing their eponymous song, despite the foul weather.
Another bird we tend to see more of at this time of year, Pochards have been present throughout the month on Rowe's Flashe Lake, and in varying numbers, peaking at five on the 8th and the 10th. Volunteer Ann Jacobs captured these great pictures of one of the drakes, including one of him in mid-dive! 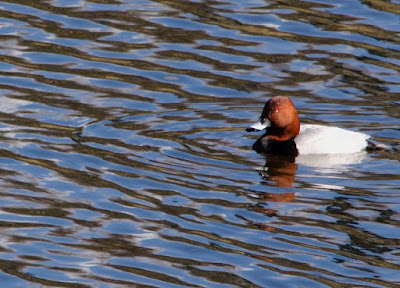 Also making more regular appearances at Rowe's Flashe recently have been a couple of Kingfishers, which Ann again managed to photograph on the 22nd.
The other star bird which has been receiving a fair amount of photographic attention is the Firecrest that's been seen on and off near the boathouse. Both John Rowland and Richard Waters managed to get some lovely shots.
Water Rails are being heard more regularly again in the Phillimore Wetland, and there were definitely two present on the 8th and the 13th. We now appear to have a regular pair of Red-legged Partridge hanging around which I've seen near the boathouse or in a Bluebell Wood a few times recently. Makes a change from the ubiquitous Pheasants!
If you've walked through the upper arboretum in the past week or two you may have noticed a lot of birds flying up from the ground around you. These are the gathering Redwings feeding up and preparing to head back to Scandinavia and Russia for the breeding season. On sunnier days they have been particularly chattery, even singing occasionally.
While migrant birds are busying themselves arriving and departing, many of our resident species are already getting into the business of nest building and breeding. I stumbled across this Long-tailed Tit nest the other day. Such incredible engineering to build something like this out of moss and lichen!﻿﻿
﻿﻿On Good Friday there appeared to be some raptor migration going on, with at least 4-5 Buzzards flying purposefully north, a Red Kite south and a female Goshawk moving powerfully north/north-west which Ed Stubbs later picked up at considerable height over Allden's Hill just to the north of the arboretum. There have been occasional sightings of Sparrowhawk and Kestrel, while single Peregrines were seen on the 13th and the 22nd.
The sunshine in the past week or two has been enough to coax out the first of the hibernating butterflies. On the 13th I saw a Peacock, while on the 17th I saw my first Brimstone and Small Tortoiseshell of the year. The most remarkable lepidopteran moment recently though was the Humming-bird Hawk-moth I stumbled across nectaring on Daffodils near the Winter Garden on the 13th. I had only ever previously seen this species in mid to late summer as it tends to migrate up from the continent. I can only assume this individual had hibernated nearby.
﻿ 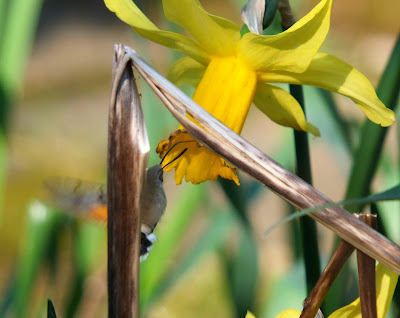 ﻿
Butterflies and moths aren't the only winged insects springing back to life with the onset of spring, as there are now plenty of bumblebees and honey bees to be seen out on the early flowering plants and, much like the bees, Ann Jacobs has been busy photographing them.﻿﻿
And finally, to finish, another of Ann's photos; this time one of a handsome Roe buck. As usual there are quite a few Roe Deer around the place and you might be lucky enough to spot them when you visit.﻿﻿﻿﻿﻿﻿﻿﻿﻿

Plenty to report from the second half of February and early March at Winkworth. Things have turned altogether more chilly in the past couple of weeks although this hasn't slowed down the approach of spring as bird song and woodpecker drumming is increasing every day it seems and there is now a fair bit of early spring colour around the arboretum - but more on that later.

First off, a few bird highlights. Down at Rowe's Flashe Lake it was good to welcome back a trio of Pochards on 28th Feb - two drakes and a female, at least two of which are still present as I write this on 5th March. On the 22nd there was a Bar-headed Goose honking away in the drizzle first thing - only the second time I've seen one here and, as I've mentioned before, clearly an escape from somewhere.
Firecrests were seen near the boathouse on 27th Feb and 4th March. These little birds never stop flitting about which makes them hard to photograph, so John Rowland did a great job of getting this picture.
I got a bit of a surprise on the morning of 2nd March when I went down to open the boathouse only to find two Grey Wagtails flying about inside. They bred in the wall last year so perhaps they were investigating possible nest holes for this year when they inadvertently ended up inside the building. Canada Goose numbers are increasing - there were eleven present on 27th Feb. Ravens have been seen and heard on several occasions recently and on 18th Feb I photographed one cronking (giving its distinctive bellowing call) low over Furze Field.
Buzzards have been up and displaying on sunnier days along with the odd Sparrowhawk and Red Kite. Meanwhile, Red-legged Partridges are becoming a more regular occurence in the arboretum, seemingly venturing further from the neighbouring Wintershall estate - on 4th March there was one calling right up the slope on the western side of Bluebell Wood. Finally, the Yellowhammer that flew west on 18th Feb was only my second record of this species here.
In other news, eagle-eyed volunteer Ann Jacobs has been out and about with her camera capturing all manner of shots around the place, from the tiny...

...to the not so tiny...
﻿﻿She's also been photographing the now numerous flowers opening up, and one of the many creatures that rely on them as an early source of pollen.

If you've visited Winkworth recently you can't have failed to miss the golden swathes of Daffodils all over the place: they really are looking gorgeous when the sun shines now.

Considerably harder to find though are the very early Bluebells, as there's still only the odd flower here and there amongst the carpets of green spikes, but they are coming!﻿﻿﻿﻿

February at Winkworth: some recent photos

Less words and more photos is the theme of this blog post, as there's not been a massive amount of new wildlife sightings to report since my previous post.

Worth a mention though are the seven Red-legged Partridge which were in Rowe's Flashe Meadow early on the 10th Feb - the highest count I've seen at Winkworth to date. Then on the 13th I was lucky enough to witness two Stoats scurrying around the gardeners' bonfire and compost area, just up the slope from the viewing platform. They were in view for several minutes and it was wonderful to watch them running about and diving in and out of the various piles of logs and things. Just typical I didn't have my camera to hand at that moment!

Luckily, both I and volunteer Ann have had chance to get out in the arboretum with our cameras recently though, and here's a selection of photos from the past couple of weeks. 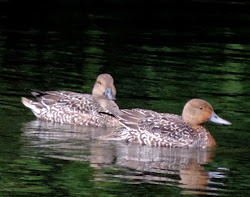 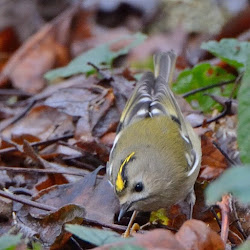 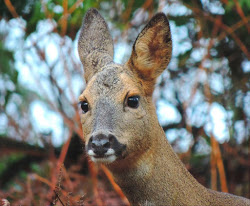